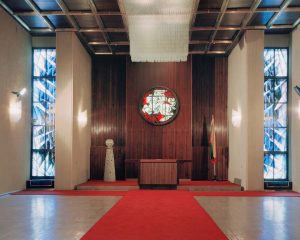 3rd of August at 7 pm will be open a photography exhibition “Sixty monuments” by Vilma Samulionyte at gallery [si:said] (Darzu str. 18, Klaipeda)

Nowadays, there is no more need discuss the famous Shakespeare phrase “The whole world’s a stage”. Different branches of social sciences analyze the importance and existence of everyday rituals and roles. The image creation becomes one of the most important parts of the advertising and entertainment industry. Although we may agree with the necessity of everyday roles and rituals, they might become an object of criticism.

Those artificially constructed spaces suddenly became the legalizing institution of your status and the place of “life celebration”, which before was a church.

After the fall of Soviet Union civil registry offices stayed and they still function as it was. Now-days you can register your marriage in the office or in the church. Civil registration offices kind of emptied in last decade.

In the series documented inheritance of Soviet times is more like not fully functioning relict object. A frontal composition of photographs and concentration on the main object – the table, focuses on an institution as a bureaucratic one and decorative interior of halls highlight artificial sanctity of spaces.

Details accompanying the series over the time grew into groups of typical parts of any office: plants, hangers, waiting chairs etc. Civil marriage offices usually had pieces of art specially made of stained glass or in different technique with symbolical content about the greatness of the future, unity, and family.

The principle of typology used in the series documents visual ways of Soviet ideology and highlights monumental inhumanity with its emptiness.

Vilma Samulionyte (b. 1978) in 2002 she graduated from Kaunas University of Technology. In 2009 she graduated from Film and TV school FAMU (Filmova Akedemie Muzickich Umeni) in Prague in Czech Republic.  Vilma Samulionyte is actively working in a field of conceptual photography. She was a participant of travelling biennale 2013-2015 “Young European Talents”. In 2013 she was a laureate of Unesco / Aschberg Bursary for art residency at the Instituto Sacatar in Brazil and in 2017 she resided there as a returning fellow. For two years she worked as a photographer in Saudi Arabia. Vilma Samulionyte participated in a group and personal exhibitions in Lithuania, Czech