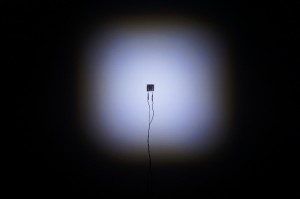 “Lucerna Sonitum 2+(0,5×2) is an artwork where light produces sound and sound produces light. Thus, light turns into sound and sound into light. If we stretch this idea a little, we get that light is identical to sound and vice versa. If we stretch the same idea a little further, we can say that light and sound are equal to each other. Thus, sound and light are the same and, at the same time, different. Of course, to think like this, we need to ignore the current amplifier and imagine that the system is operating under ideal conditions, i.e., it does not lose energy.

This situation is reminiscent of the life cycle of the Turritopsis dohrnii jellyfish, where a dead jellyfish, instead of dying, transforms into a polyp and produces a new jellyfish. In fact, it clones itself. Genetically, all the jellyfish that grow out of this polyp are the same jellyfish that turned into polyps. On the other hand, the new jellyfish has a new body, so it is not the same old jellyfish. A polyp behaves in a similar way to a plant, by obtaining the necessary materials from the environment to grow new jellyfish. Thinking that the transformation of light into sound and vice versa mirrors the cloning cycle of the jellyfish, the amplifier acts like a polyp—it collects energy from outside the system and transfers it to the system, thus compensating for the loss of energy that occurs during the transformation. The electronic system begins to function as a biological one.

Tomas Daukša (b. 1988) is a PhD student in painting at the Vilnius Academy of Arts, working with systems derived from equilibrium and hybrid systems. During his studies he worked with the idea of a closed logical system, creating artworks in which one part depends on the other, i.e. does not have a direct causal relationship with the outside of the artwork (e.g., a is because of b, b is because of a). He lives and works in Vilnius.